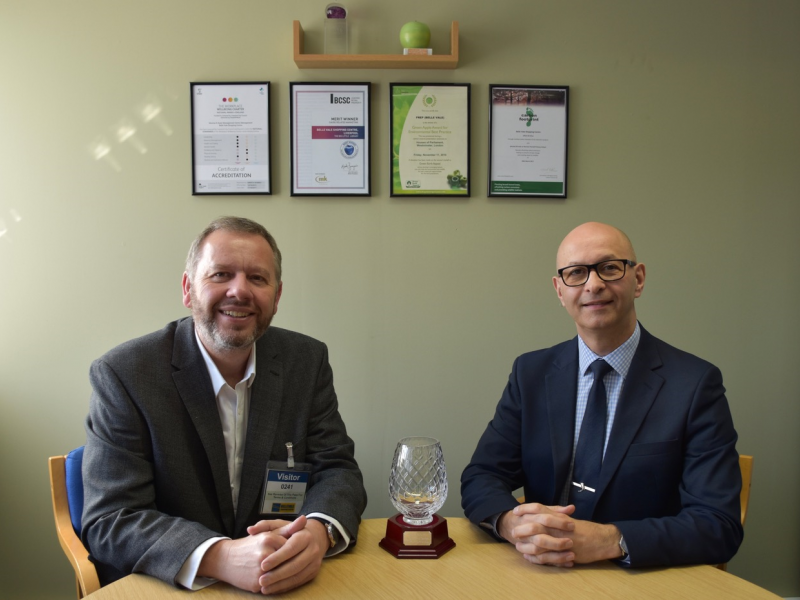 Belle Vale Shopping Centre was opened in 1973 by the late Ken Dodd, OBE. Over the last 40 years the Centre has seen a number of owners, each re-developing and improving the Centre to be what it is today. The Centre is over 300,000 square feet, and has, on average, 72,000 visitors a week. There are 65 shops, a McDonalds 'Drive Through' restaurant, an on-site supermarket, Gym, Jungle Fun kids soft play area and a Lazer Quest attraction.

It was great to speak to Centre Manager Paul about Belle Vale and reminisce about the Centre's history, achievements and future plans. In 2016, the Centre won a National Award, 'The Green Apple Award' for their environmental achievements for continuously reducing waste to landfill and in 2012, achieved their target of ZERO waste to landfill - that has been maintained since. In May 2016, the Centre also achieved 'The BCSC Purple Apple Merit Award' for their partnership work with Gateacre School for ‘The BIG Little Library’ project.

Retaining a contract for ten years within our industry is quite unusual and that's why we couldn't let the occasion pass without making a fuss about it. Centre Manager Paul was expecting our Soft Services Director accompanied by a lengthy KPI meeting - we think he was pleasantly surprised when Andrew, Lorraine and Jennie walked in too. 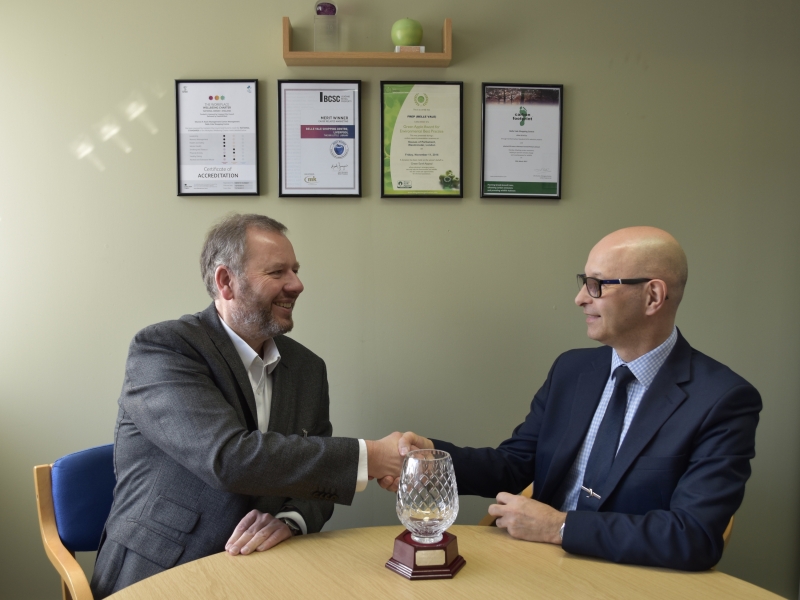 Well done to Security Operative Tom at Great Western Arcade - here's what Centre Manager, James Roberts, had to say about him;

"Can you please pass on my thanks to Tom for being incredibly supportive last night with a troublesome tenant.

Tom is consistently going above and beyond to ensure things go smoothly and as such can you arrange for a gift voucher of £50 for him at our cost.

Also, Tom arranged for the Big Issue seller to receive a free hat, something that shows his character and I would like to arrange for this to be documented and published on our social/website".

Middleton Shopping Centre's Employee of the Month for February was Jacky Porter for her outstanding customer service and commitment to helping the team. Well d​one Jacky!

Following on from Middleton Shopping Centre, meet Charlotte Watt, one of three new Dual Service Managers in the UK.

This month, we have asked two of the three Dual Service Managers, Charlotte Watt from Middleton Shopping Centre and Zed Hamid from Charter Walk, to tell us a little bit about themselves. 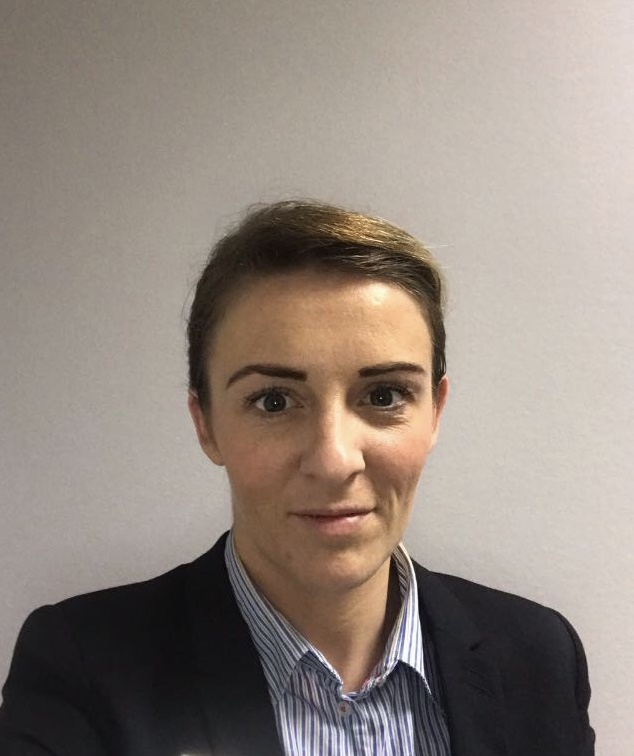 "I spent the first nine years of my career serving in the British Army as a Driver Radio Operator and Physical Training Instructor. During my time in the military I served in Afghanistan, Germany and various locations in the UK. Becoming a soldier developed me into a well-rounded disciplined professional with an interest in security and fitness. When my military career came to an end I decided to develop my security skills further.

In 2014 I gained civilian qualifications in close protection and professional foot and mobile surveillance. I applied for my SIA license and was quickly selected to work for a number of the UAE royal family as a member of the protection team. During the next three years I developed my skills and knowledge working as a security consultant in many locations including high threat areas such as Mumbai and the Caribbean. I acted as a team leader on a number of tasks for various clients across the globe facilitating safe travel and providing appropriate security advice.

In 2016 my beautiful twin boys were born and at this time I decided I wanted to move away from self-employment and begin a new start closer to home. After some time off with the children I joined Anchor Group Services for a fresh challenge as a soft services manager. This role has brought me stability and a better quality home life as well as many learning curves along the way. I hope to continue my career path with the company and look forward to what the future has to offer".

Before joining Anchor Group Services I had the pleasure of working as Building Manager for Aston Services Group based at Pendle Rise Shopping Centre in Nelson. My role was to manage all aspects of Operations and although initially just Security, following a Contract Award to Aston Services and  TUPE Consultation process this changed to Dual-Services (Security, Cleaning and Maintenance). In addition, a key part of my role was to ensure compliance with AI’s, the Client Health & Safety Management System (ALCUMUS) and Fire Regulations. I also attained my IOSH qualification whilst in this role. Recruitment, training and retention of staff was also a key part of my function. This role also involved deputising in the Centre Manager’s absence.

Prior to joining Aston Services I spent some time delivering SIA Training which included the following Courses; Security Guarding, Door Supervision (Physical Intervention Module included) and PSS (Public Space Surveillance) all to SIA Licensing Standards. I am registered as a Tutor with HABC (Highfield Awarding Body for Compliance).

Before this, I worked in the NHS for a number of years starting as a Security & Car Parking Officer in 2003, moving onto a Shift Supervisor role later in the same year which then led onto a Senior Supervisor role the year after. In July 2005 all soft and hard services were taken over by Balfour Beatty at The Royal Blackburn Hospital. I was offered the position of Security Manager which I accepted and in November 2005 I was nominated for the ‘Outstanding Customer Service of the Year Award’ by the Operations Director for Consort Healthcare (PFI Partner). This led to further progression and my role changed to Head of Security. I spent a lot of time assisting the Trust with delivering Core Mandatory Training and Conflict Resolution Training.  After leaving this role I went onto qualify as an LSMS (Local Security Management Specialist) working directly for an NHS Trust.

Joining Anchor Group Services on the 1st August 2017 was quite exciting for me – What an excellent move! A fantastic company to work for! I've been here for eight months so far and I’m still loving it! A very proud Anchor Employee indeed. I had the opportunity of once again working for my previous Client.. Debbie Hernon. I have learnt so much from Debbie in my previous role. Coming into a new business is of course challenging for anyone but I have to say that the entire team at Anchor HQ made me feel quite relaxed and this was simply done by supporting me in my role, directing me to the right person(s) for a specific issue or query, providing what I need for the site in order to ensure service delivery remains of the highest standard and so that KPI’s are achieved. Roz, has been absolutely fantastic with providing pretty-much day-to-day support for me. If Roz, is not at Charter Walk I always get a quick 5 min call from her to ask if everything is OK and if I need anything. She always asks about the team as well. This is very reassuring for a new Manager. I am looking forward to making further contributions to our business and Charter Walk to make us shine even more as a service provider".