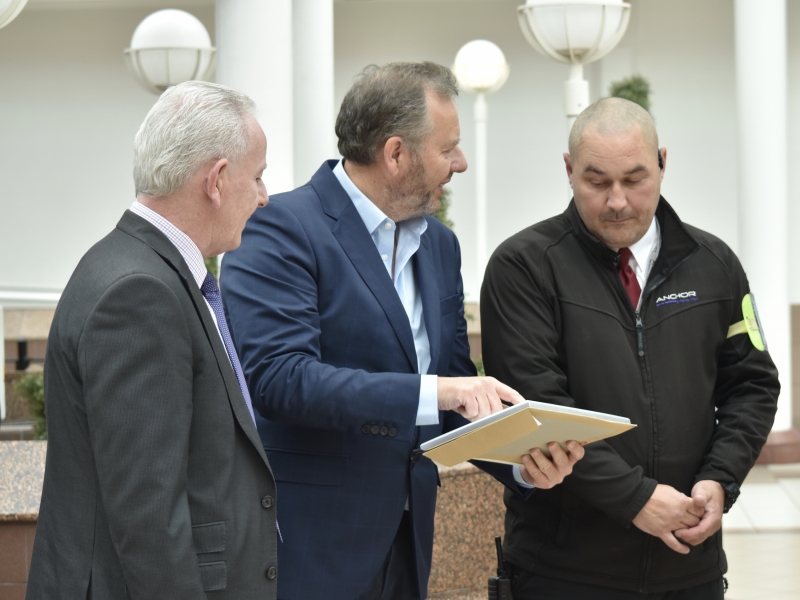 Unless you’re directly involved with the security industry it’s hard to comprehend exactly what our guards do day in, day out. Apart from the obvious duties, their role is incredibly complex depending on the type of site, client and location. And the truth is, each day is different. You could have a day where half the region’s shoplifters descend on your centre and other days, nothing out of the ordinary happens at all. One day you could be talking someone down from a roof and the next you might be saving a 7 month old baby’s life. It sounds extreme but this is a typical, unpredictable day in the life of a Security Guard.

Two weeks ago, seven month old Charlie was with his Mum and Granny in Jeanie’s cafe, when suddenly he began to choke on a snack. His mother, absolutely fraught with panic began to shout for help. Our guard, Steven, was luckily just a stones throw away patrolling the centre and rushed to the scene. As the first responder, he had to think quick and recall his first aid training on the spot.

Charlie’s mum had hold of him and was trying her best to help her son but Steven quickly got to work reassuring Mum and took Charlie, he put him over his knee and patted his back and talked to the infant, “come on Charlie” he said, repeatedly in a gentle but heightened tone.

Steven was cool and calm on the outside but the adrenaline had long set in on the inside. The baby’s airway was blocked and Steven was tirelessly patting and encouraging whatever was stuck in the boys throat out. With a stroke of luck, an off duty district nurse was shopping nearby and heard the commotion. She took over from Steve but Charlie began to go limp, the colour drained from his little body and he stopped breathing. The nurse and Steven started CPR.

“Imagine blowing out a candle using little breaths” - Steven recalls his part in the resuscitation.

Steven was sent for the defibrillator (as a complete last resort)

He returned with the de-fib and continued to clear Charlie’s airway, and then “after what felt like hours” Steven recalled, Charlie began to move, he started to get some colour back in his cheeks and then the exhausted infant let out a huge scream - just as the paramedics arrived on site.

The paramedics whisked Charlie off to hospital, where he remains whilst he undergoes further tests.

This particular incident resounded with me more so than usual, as I have a six month old daughter who is just beginning to try solid food, and I can only hope that if she gets into difficulty when I’m out and about, that someone as capable as Steven is on duty and on hand to help.

The irony for Steven was that his 1st Aid refresher training was scheduled two days after this incident and so he had a real tale to tell when he turned up for his course!

We wish Charlie a speedy recovery and the team hope to see him back at Cherry Tree soon.