CEO gets ‘wheelie’ stuck in at MediaCityUK! 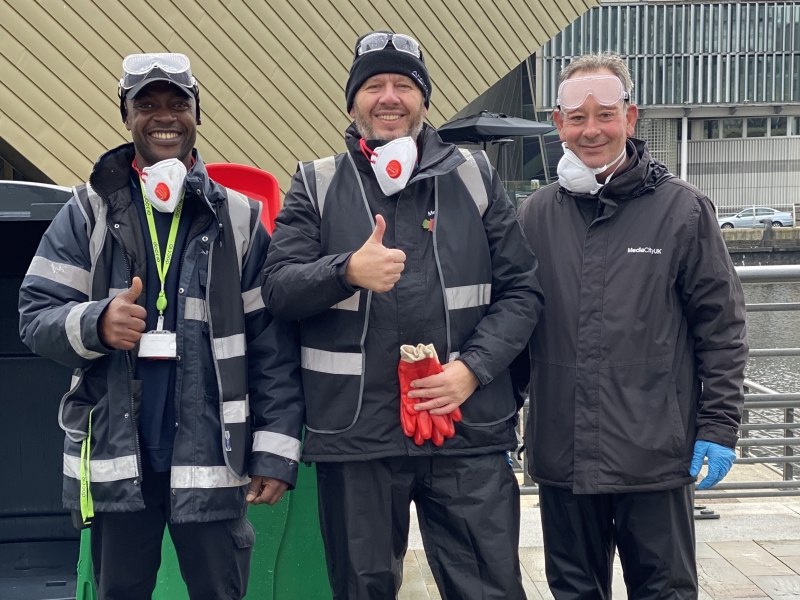 What do you get if the CEO offers to do a couple of hours work 'on the job'? Well, in our industry, you get some training, PPE and led off to the bins!

I dropped Andrew off at Media City where he was quickly whisked off by the amused team for some training on the jet washing machine and to collect his uniform and PPE.

For those of you who don't know, MediaCityUK is a 200-acre mixed-use property development on the banks of the Manchester Ship Canal in Salford and Trafford, Greater Manchester.  The project was developed by Peel Media; its principal tenants are media organisations and the University of Salford. The land occupied by the development was part of the Port of Manchester and Manchester Docks.

The principal tenant is the BBC, whose move marks a large-scale decentralisation from London. ITV Granada completed the first phase of its move to MediaCityUK on 25 March 2013, followed in two stages by the northern arm of ITV Studios: the second stage involved Coronation Street being moved to a new production facility on Trafford Wharf. The Studios on Broadway houses seven high-definition studios, claimed to be the largest such facility in Europe.

Anyway, someone's got to clean this magnificent place haven't they? and that's where we fit in to all of this. We won the cleaning contract for MediaCityUK in Jan 2019 and having met the team several times whilst visiting for meetings, Andrew wanted to show them that he hasn't lost touch with what they do, day in day out, and he offered to go and do a shift with them. 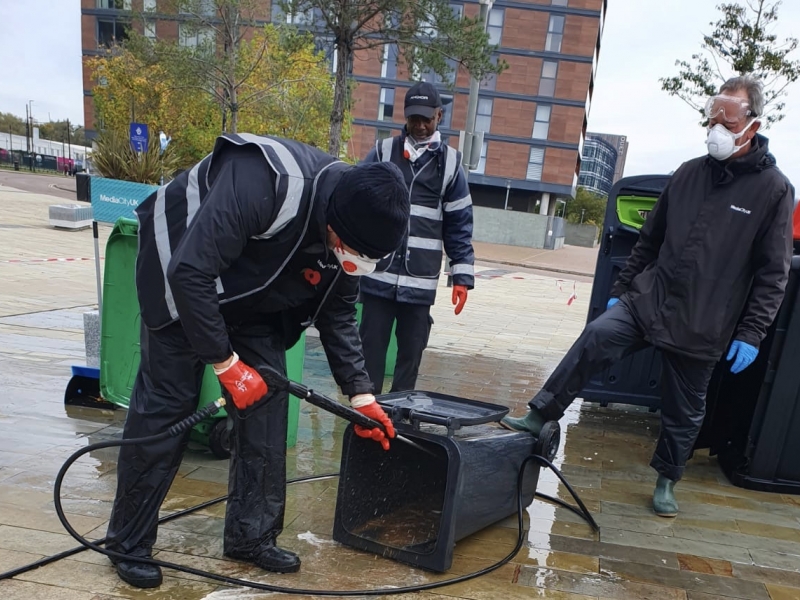 Sunny and Thomas were in charge of training the CEO and they eagerly introduced him to the bin store, and to his horror, delight, he was trained and tasked with cleaning the wheelie bins. The wheelie bins are quite big, so they found somewhere with enough space to give them a good clean, and to allow space for water splashing around - it's not a pleasant job at the best of times but throw in autumnal temperatures and a bit of side wind and it's a tricky task to complete. 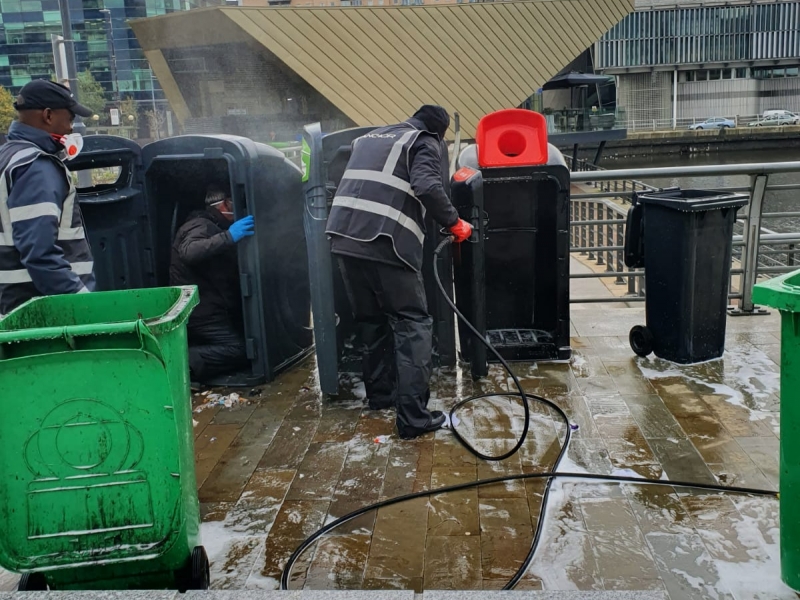 Afterwards, the guys joked with Andrew and asked him when he was coming back for another shift and before he knew it, he had been signed up to visit Peel L&P over in Liverpool to clean a bridge?! more to come on that nearer the time.

And then we caught up with Rachel Williams, Soft Services Manager at Peel Media and Social Media Exec, Emma Green, for a quick coffee and catch up. They were interested in Andrew's background and so he told them a little bit about his time spent on the beat in Merseyside before deciding to leave the Police and start his own business. He explained that people, have in the past, referred to his level of management as being up in their metaphorical 'ivory towers' but he said it's quite the contrary, when he started Anchor Security Services back in 1987, he's done the 12hr shifts all year round patrolling vacant properties, he's sat in a van on nights, he knows what it's like to put the long hours in - doing a job that doesn't necessarily produce much satisfaction and he hasn't forgotten what it's like to do a long, physically demanding shift - and is very proud of the hardworking individuals of Anchor Group Services keeping client spaces clean and safe all year round. 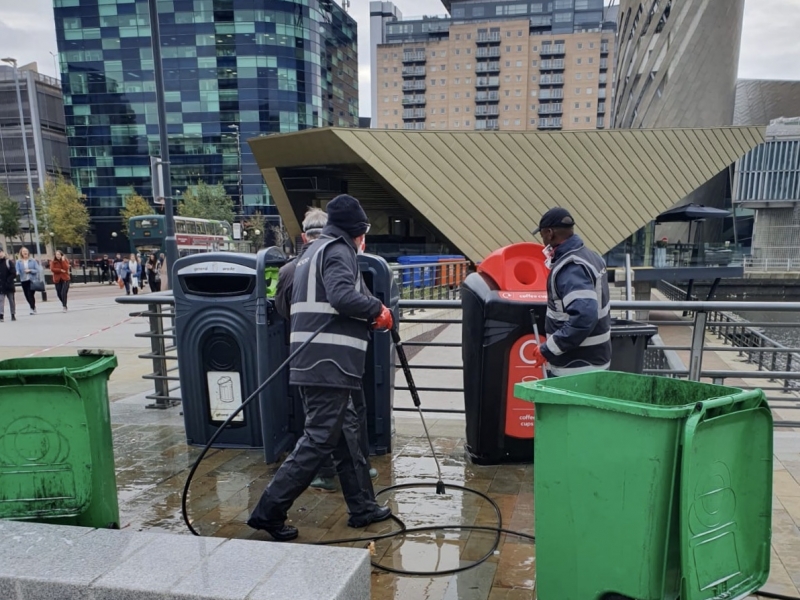 Below; Rachel Williams, Soft Service Manager of Peel Media with Andrew after his shift. 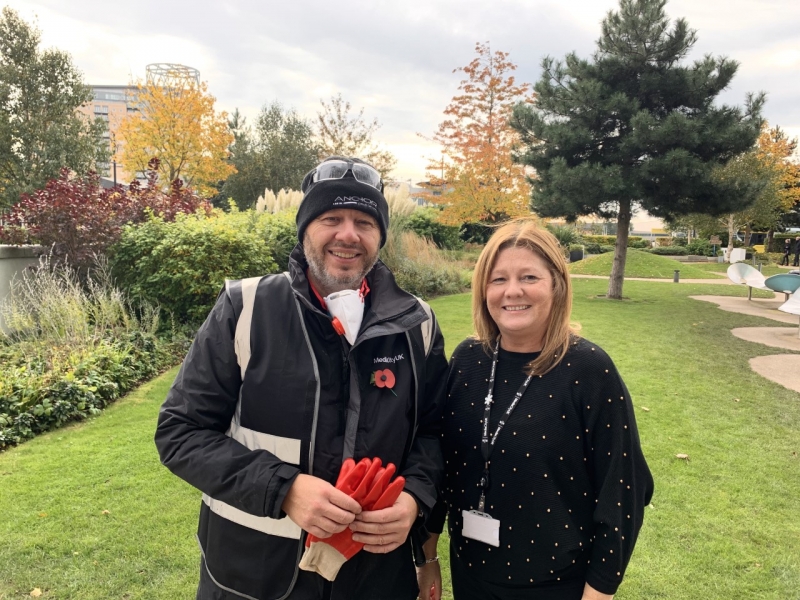